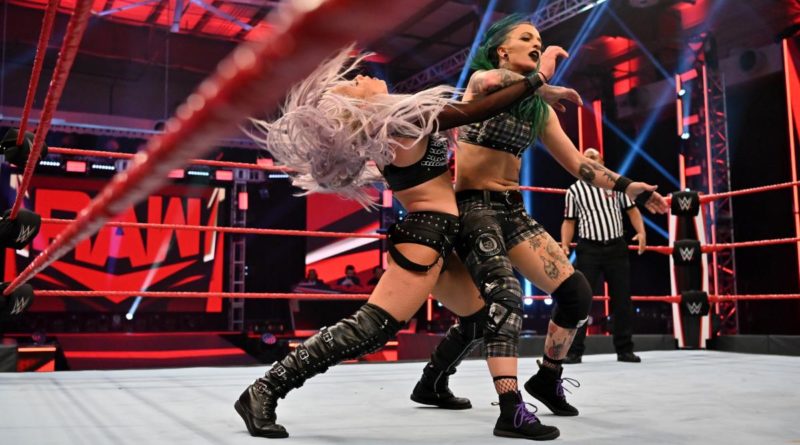 Welcome one and all to the RAW RECAP, presented by THE REVELLEUTION! The upcoming Money in the Bank event is starting to shape up as Raw has already decided its three competitors for the Women’s match. Asuka, Nia Jax and Shayna Baszler will form an all-Heel trio to take part in the match, with Smackdown’s Dana Brooke being one of three women from the blue brand. Will anyone get an edge as the now very unique ‘Headquarters’ match approaches? And will Becky Lynch have to deal with a new challenger while others fight for a chance to cash in on her? Let’s get into it, and find out…

ZELINA VEGA with her clients interrupted Drew McIntyre again to try and set up a sneak attack for Andrade, but McIntyre easily dispatched Andrade with a couple of Claymore Kicks. Vega would be on commentary for her client Austin Theory’s qualifying match against Aleister Black.

CHARLY CARUSO interviewed Baszler on the ramp, and again Logan’s name was mentioned as Baszler bragged that she hadn’t broken any rules, only Logan’s arm. Footage of the arm stomp spot then show (Logan was mentioned more in this segment than she’d been during her time in WWE!). Hartwell is an NXT Superstar relatively new to the brand.

Baszler started off with strikes then a Gutwrench Gutbuster. She went for the arm stomp spot from last week but Hartwell avoided for a one count off a roll-up. Baszler seemed amused by Hartwell’s fightback, but shut it down with a tackle into a Spinebuster then a Knee Strike as Hartwell was kneeling. Then Baszler got the arm stomp for the instant ref stoppage and victory for Baszler.

Baszler wasn’t done, bringing out a ladder before she hauled Hartwell out of the ring to swing her into the barricade. Setting Hartwell agains the ringsteps, trapping the arm into the ladder then stomping the ladder to send a message.

Caruso interviewed ASUKA and KAIRI SANE but once again like last week neither seemed to be taking the threat of Nia Jax seriously, calling Caruso stupid and Asuka saying no one would be ready for her at Money in the Bank.

There was more junk with the LANA and Bobby Lashley storyline to continue their marriage troubles.

No Asuka at ringside again. Sane tried for a Sleeper Hold early but was thrown off, and a Dropkick attempt was swatted down into a Big Swing. Asuka was watching on from backstage to yell encouragement. Jax tossed Sane around a couple times then a couple Short-Arm Clotheslines.

Sane unwisely tried a slide-in Sunset Flip that Jax countered, and then DANGEROUSLY tossed Sane into a corner with a Double Choke into a Slam that left Sane’s head hitting the middle then bottom turnbuckles. Sane recovered, and avoided a charge. Sane kicked away at Jax’s knee as she seemed to tweak it running, using kicks and Dropkicks. Sane peppered Jax with strikes then a Spinning Backfist that finally knocked Jax down. Sane hit a Sliding D to Jax in a corner, but soon after Jax caught Sane and hit a toss-up version of The Annihilator for the win.

Caruso interviewed RUBY RIOTT backstage, and Riott claimed there was never really was a true Squad. She said she had to have double shoulder surgery because she had to carry both Logan and Morgan. Riott vowed to show Morgan how weak without her she is.

Morgan turned to her bratty dyed pink hair this week but the new dark, black gear. They showed recap footage of Riott returning only to deck Morgan. They started with an agressive lock-up but Riott took control with hard kicks and strikes. Morgan soon came back with a series of strikes including a Knee Strike, then a House on Fire combo ending with an Enzigiri. The double bounce Springboard Dropkick got Morgan a two count.

Riott countered a Suplex, hanging Morgan on the ropes then hitting a Superkick to the head for a two count. The women traded rope charges, catching one another with strikes. Morgan took a Superkick as she was on her knees. But Morgan charged as Riott ran the ropes, catching her with the Rope Rebound Flatliner for the victory. The announcers selling it like it was a major victory for Morgan and that she’d put an end to the feud to put Riott behind her.

Flair started off with her Big Boot, then hit a Chop. A second boot only hit rope as Cayden hit a Superkick for a one count. A Crucifix Bomb got a two count as Cayden managed to lock on a Cobra Twist but Flair powered up to get into the ropes. Flair soon came back with her Spear then the Figure Eight for the win.

Belair was hyped up by The Street Profits before her entrance. Belair tried overpowering Garrett early but got pie-faced. Belair hit slams from the guthold position then hit a Hiptoss from the corner. The match seemed to be more letting the Street Profits get themselves over with over the top guest commentary as Belair countered Garrett’s moved and showed off rope work before knocking Garrett down with shoulder knockdowns.

Belair hit a Squatting Delayed Suplex, then a Splash to Garrett’s back. Garrett came back with a Hot Shot on the ropes then a boot to the head when she avoided a Shoulder Thrust through the ropes. A Crossbody only got a one count. Garrett hit a Superkick but when she did a Handstand to bounce off the ropes, Belair caught her with a kick to the gut. An Alley-Ooop to the turnbuckle soon led to the K.O.D. and the win.

Caruso would do plenty of interviews on the show, including once again being smitten by Angel Garza.

A LOT of women’s matches on the show which was nice to see, even if over half of them were squashes if not just glorified squashes. Clearly the competitive Riott versus Morgan match was the best of the night and really showed how good both Morgan and Riott were. Their feud was cut short with lockdown events changing the WWE, but it was still nice to get a payoff even if it was just one match rather than a built up feud. One has to wonder if the WWE will keep the fire under Morgan with so many potential challengers to Lynch, especially Heels, already lined up.

Nia Jax continues to show how dangerous of a worker she is with that nasty bump that Sane had to take to the corner. The WWE is at the point of trying too hard with Baszler – we already know she’s a threat, but feeding her jobbers isn’t going to change the fact that when she faced Lynch she lost. Belair was good in her match against Garrett (who also put on a good showing, better than her infamous ‘slow motion’ match from NXT last year) but the bout was overshadowed by The Street Profits rambling on commentary. Overall a good night of sorts, but there could have been a lot more to it.

That’s your lot for this week! Be sure to stop by in seven days time and we’ll cover it all with the next edition of the RAW RECAP! See you then! 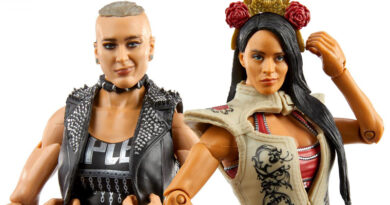 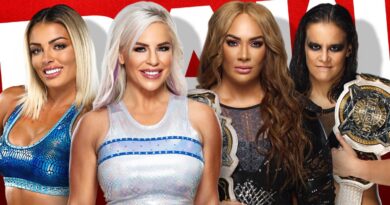