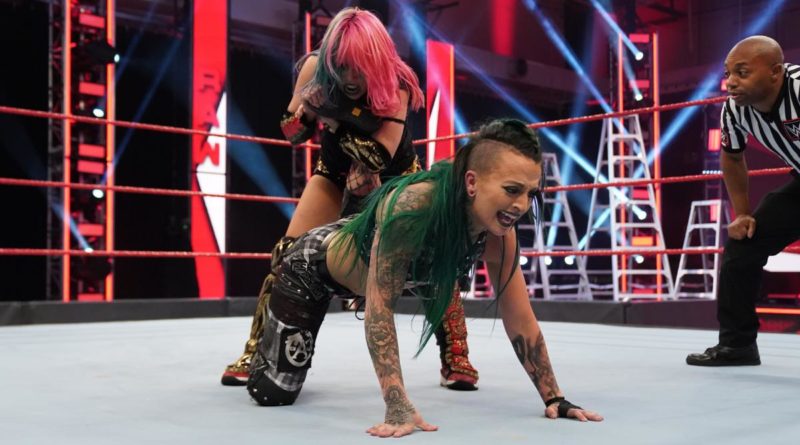 Welcome one and all to the RAW RECAP presented by THE REVELLEUTION! The WWE is rolling on after WrestleMania and we’re now heading towards Money in the Bank event. The female Superstars from Raw and Smackdown will collide for the chance to grab a briefcase and a cash-in oppertunity for a Women’s Championship Match whenever they want against their brand’s Champion. So who are going to be the first names thrown into the win for the all important Ladder Match? Let’s get into it, and find out…

ZELINA VEGA and Andrade interrupted Drew McIntyre as Vega claimed her client was the real Champion of Raw. Eventually leading to a Champion versus Champion match made. Vega would repeatedly appear as she and Andrade would be interviewed later on, Vega would do commentary duty for her client Austin Theory’s match and would look on with approval as her group of clients put the beating on a local competitor after Angel Garza’s match.

Asuka was without Sane again at ringside, despite the Warriors being seen prior doing a little warm-up backstage. Asuka showed little worry, doing her mad dancing to Riott’s theme as she came out. Riott started with a fake-out handshake for a brief Headlock. Strikes soon came as Riott finally got a shoulder knockdown for barely a one count. “Where’s the real Asuka?” Riott demanded with face slaps, and soon got it as Asuka went after the arm with an arm lock and some stomps.

Riott got worked over, and tried a comeback with a vault Headscissors out the corner but Asuka countered with a version of her Pop-up Kneestrike for a near fall. Riott was selling her arm as Asuka choked her with her foot then the ropes, then Riott was sent off the apron with a Running Hip Attack. Asuka followed up with a Sliding Knee Strike along the apron to Riott on the floor. Asuka was in control on the floor at the break, and back from commercial Riott was shut down trying to fight up from an arm hold.

Asuka went for another Running Hip Attack but Riott in the ring dodged, then hitting a Superkick to Asuka sat on the ropes. Then uniquely kicking the top rope to make Asuka tumble down to the floor before tossing her back in for a near fall. Riott hit a Running Forearm to the corner, but soon ate one from Asuka. The two women exchanging blows and kicks. Riott did an odd rolling move for a slide into a cradle for a near fall, before Asuka went for an Armbar that Riott countered into pin for a two count.

Asuka countered the Riott Kick into an Ankle Lock, flowing into the now familiar German Suplex from the ankle hold. A Sliding Kick (that the announcers still just call a Shining Wizard) got a two count. Riott prevented the Asuka Lock then hit a couple of Running Superkicks to Asuka in the corner. A Northern Lariat to a kneeling Asuka for a near fall. Riott went for a blind Senton from the middle rope, but Asuka dodged to apply the Asuka Lock but only briefly as Riott had a counter with a pinhold for a near fall.

Riott hit a Flatlinert into a Crucifix Pin but when Asuka kicked out, Riott flowed it into a Rings of Saturn submission. A couple counters followed, before Asuka finally got the Asuka Lock in to force an instant submission.

Post-match CHARLY CARUSO tried to interview Asuka but she ranted, but said clearly that at Money in the Bank ‘No One is Ready for Asuka!’.

BECKY LYNCH came to the ring for a promo. Bragging about her WrestleMania victory and called out rival Shayna Baszler. She claimed she used her apparent arrogance to fool Baszler and used royal references that the only person who could get close to the Queen to destroy her was ‘the Joker’ to explain her silly antics prior to Mania. Lynch called out whoever wins the MITB briefcase, and vowed she’d shock the world again.

Before the match, Baszler refused to comment on desperate attention seeking remarks by friend Ronda Rousey on social media. Early Baszler no-sold a Logan strike to take her down for a mount with strikes. Baszler hit a stomp to the arm that left Logan screaming and the referee called the match off. The ring announcer screwing up as she called Logan the winner but the commentators correcting the announcer to say Baszler won by Logan being unable to continue.

The Kabuki Warriors were interviewed by Schreiber, and Asuka bragged that Riott was not ready. The Warriors however didn’t seem to take the threat of Jax seriously as they joked and danced off.

Sane came out alone for the match. Jax shoved Sane to start as Sane tried to jump. Sane tried to use her quickness early, provoking Jax before hitting Running Dropkicks before Jax was just shoved out of the ring. Asuka watched on from backstage chanting for her fellow Warrior. Jax hit a Bodyslam then some hairpull Slams and rough hairtosses. Then a Gorilla Press into a Samoan Drop which Jax calls The Annihilator (nothing to do with the band) for a squash win.

The NXT Women’s Champion CHARLOTTE FLAIR came to the ring. She bragged about her wins this year and as usual put herself over at the expense of Rhea Ripley, Bayley and Becky Lynch. Flair claimed she would make future opponent Io Shirai bow down to The Queen.

LANA accompanied husband’ Bobby Lashley to the ring for a match against No Way Jose as their marriage troubles were obvious as Lana screamed during the match over and over. Lashley got distracted more than once by Lana being vocal but still got a win off a Spear.

BIANCA BELAIR was backstage with The Street Profits, as she set her boys right with their silliness, reminding them that they’ve never beaten The Viking Raiders.

Perhaps due to COVID-19 restrictions it’s only apparently 6 Superstars in the MITB matches, so that’s Raw’s line-up already set in stone. It seems odd that they’re making Baszler take a long road to a Lynch rematch, but there’s also a chance that Jax might get the win to take advantage of a Lynch/Baszler rematch to cash in. Of course, Raw’s line-up might not matter if a babyface from Smackdown wins to go after Bayley.

The matches were two squashes that show how little the WWE has any interest in Logan and feels that Sane is not on the same level as Asuka (which is so not the case!). Riott versus Asuka was a really great bout and showed that Riott can deliver when she gets the chance to, which is sadly so few and far between. It’s a shame however that we don’t get to see what Liv Morgan could have done in a MITB match. Have they given up on her push already after last week?

Lynch and Flair had basic but solid enough promos that did their jobs. Vega got a lot of well deserved screen time on the show as her stable made a mark. Less said about Lana’s marriage issues 2020 the better.

That’s your lot for this week! Be sure to stop by in seven days time as we cover it all with the next edition of the RAW RECAP! See you then! 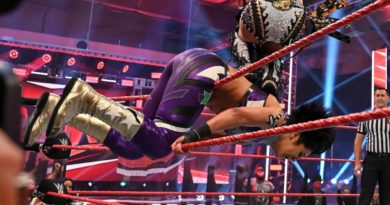 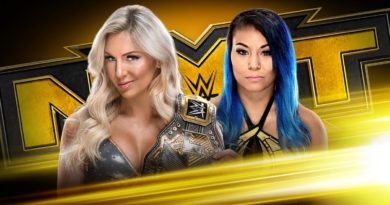